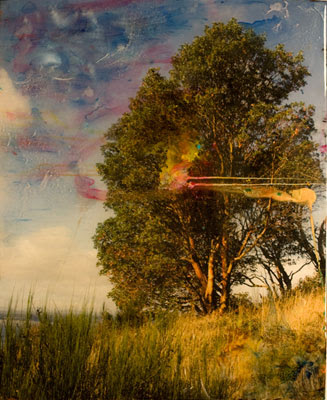 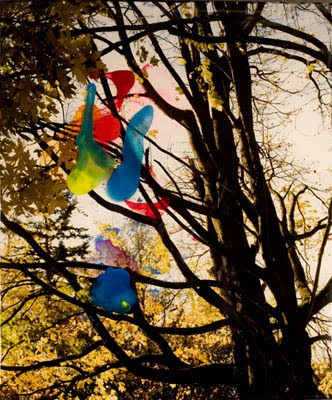 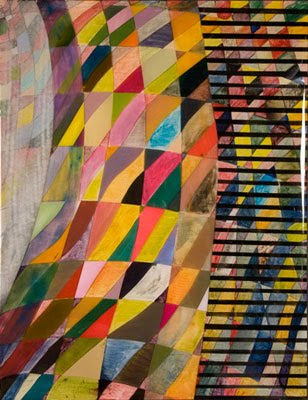 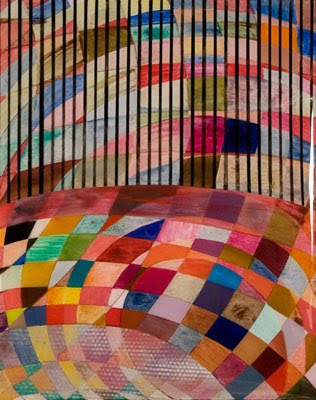 
q) Had you always planned on being an artist [or had you other hopes]?


a)I always knew i would be an visual art or a musician.


q) Do you have a preferred medium to work on? Why?


a)in my study of clear paint vehicles, i have found epoxy resin which i use in my paintings and sculptures. I enjoy its looks feel plasticity and flexibility in terms of how many things i can make it do.


q) How would you describe your style?


q) Do you go through any certain processes while trying to produce your work?


a)with my sculptures, i cut and recut my individual parts to create a complex whole. With my paitnings i start from a place i know and work through the unknown, back to a place i might know someday.


q) What are you working on at present?


a)I am working on completing some paintings that ive been working with for a long while. And my sculptures are getting larger and more monumental.


q) What about recent sources of inspirations?


a)I enjoy going to art galleries and museums, The last tri was to Los angeles Ca. to the museums and galleries there


q) What are some of your obsessions?


a)lists and being on time


a)I show at the william traver gallery in Seattle the Beppuwiarda gallery in portland the George billis gallery in LA and the Friesen gallery in sunvalley.


q) Do you have any suggestions or advice for artists that are just starting out?


a)work hard be a truth, have your own voice and listen but dont listen to others.


q) Who are your favorite artists?


q) What books are on your nightstand?


a)How late it was, how late, speed tribes ,the gingerman books on science or spirituality


q) To what weaknesses are you most indulgent?

Posted by Claudio Parentela at 3:51 AM No comments: 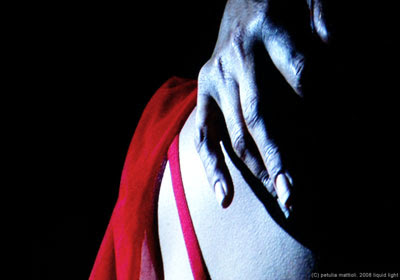 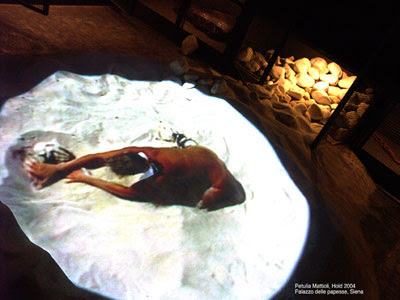 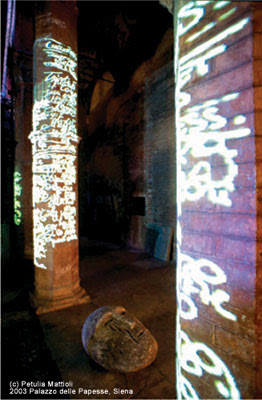 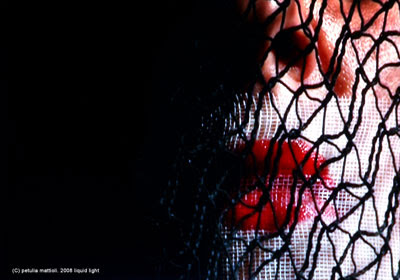 q) Please tell us a brief info about yourself.

Petulia Mattioli studies illustration at the European Design Institute of Design in Rome and Milan.

From 1989 to 1996 works between Rome and Milan in an architecture and graphic studio as illustrator and graphic designer, collaborating among the others with Feltrinelli and Castelvecchi. From 1992 works on video, digital photography, graphic design, video installation, set/light design and real-time multi-visions using every media and language, from video to raw material.

She is the tenth recommended artists at the “Biennale dei Giovani Artisti” in 1998. In the same year she wins the competition “Arti Visive 2 and her artwork is on show at the Palazzo Ducale in Genoa.

Among the most important shows:

Lives and works between Tuscany, Milan and New York.

q) Tell us about your humble beginnings, When did you you first realized that you wanted to be an artist?

a)I never decided " i wanted to be an artist", the artistic path i'm following is a real need. My father is a comic drawer, so since I was a child I express myself through drawings and colors...naturally listening to music! In my house there was always music going on like Miles Davis, Brian Eno, Jimi Hendrix, Rolling Stones ...

q)What are your tools of the trade and why?

a)My spasmodic research started on paper but then moved through any kind of media: graphic, sculpture, photography and video.

My work today is definitely photography and video oriented, but still there's something about all the experiments i did in the past.

Also, working daily as a graphic designer make words, space and synthesis part of my style. The reason why i don't refuse any possible

tool/media is because i deeply believe that an artist expression must be free to move and explore.

If strong, true and clever, the artist identity doesn't risk anything, on the contrary it's a value!

q)Who or what gives you inspiration on your morbid art?

a)Mainly i'm inspired by music which I really consider as part of my life and as i wrote on my myspace "visual arts? is the only language i know to communicate my uneasiness but i can imagine myself without it, but NEVER without music.

Music is my life soundtrack! It gives colours to my dreams and visions..."

Generally I can have a creative quiver from a written phrase or a daily new, a song, an image..

q)Is your artistic background self-taught or did you go to college to study?

a)When i decided to go at the European Institute of Design -illustration department-, in Rome first , than in Milan the last two years, the only thing i had in mind was to be part of the colors, paper and pencils world... While i was in Rome studying i was working at the same time for a graphic design studio and when i went to Milan to finish my IED course, i worked for a group of architects studio. So i was definitely learning a lot of different things. But more and more i was working in the real life, more i was pretending from my school. Being a very expensive one, i decided to make the most of it jumping in any different courses i was interested in. So from photography to scenography i put together something more " in my bag".

In those years i met Eraldo Bernocchi and Sigillum S who gave me the chance to realize my first artwork. Music has always been my main inspiration and passion, so when i met them it was the real beginning of my artistic work connected to the music.

q)How do you keep “fresh” within your industry?

a)I like your use of the word "fresh" instead of "original".. thanks!

There's nothing around really original, but still artists want to reach this status trying to shock and be sensational.. shouting louder and louder..

My motto is the beautiful title used by Rebecca Horn " Rebellion in silence" which i think is more powerful than anything I heared in the last years.. So to keep my artworks "fresh" I put passion and truth without any intention of being "original and arty", but aiming to give a deep emotion.

q)What are some of your current projects?

a)My last video installation "Liquid Light" created and exhibited in 2008 at Palazzo Lomellino, Genoa and in 2009 at Galleria Giulia, Rome is officially in sleep now, so about my new video artwork there still a lot of work to do

i'm now working on the idea so it will take a while to reveal it..

I just finished the artwork for the album "Somma", the project Eraldo Bernocchi and I created with Bill Laswell and the Tibetan Monks.

It will come out for the new english label RareNoiseRecords in february.

q)Which of your works are you the most proud of? And why?

it's like asking to a mom who's her favourite child.. but i can say that Hold is an artwork i'm really proud of.

It was a video installation I conceived for the Caveau of the Contemporary Art Centre Palazzo delle Papesse in Siena in 2004. On that occasion I also realized a dream: to work with one of my favourite artist Russell Mills.

I involved him to work with me on the installation and a great work came out.

Also the last one, Liquid Light, is something i'm proud of. This was the first time i could project, write and direct a professional video with a real -short- budget. I always had to deal with no money so everytime my videos have been technically limited. At the same time this limit trained me to concentrate my ideas and visions objectively in order to come out clear and direct, considering the technic as the last phase of the work.

q)Are there any areas, techniques, mediums, projects in your field that you have yet to try?

a)Not really a medium, I really hope one day to realize a short movie.

q)What do you do to keep yourself motivated and avoid burn-out?

a)I did a choice when i was very young.. it was my first solo exhibition in Rome when i realized that i didn' t want to be part of the "arty freak show".

I decided to not live on my art in order to mantain my integrity, my own ideas. That's why i'm working as graphic designer. So every time i'm creating a new artwork i feel like the first time with all the enthusiasm and passion.

q)how do you spend most of your free time?

a)I try to travel as much as i can, it is what really makes me "on"!

Than, listening to music, reading and watching movies.

q)What contemporary artists or developments in art interest you?

Also the writers Jean Baudrillard and J.G. Ballard as well as the movie director Takeshi Kitano are very important for me and i refer

to them quite often.

Naturally, a lot of visual artists are interesting and helpfull for my artistic process, but rarely i'm moved..

and i cannot stand Koons, Cattelan, Beecroft.. and a lot more like them..

q)We really like some of your pictures, how can we get our hands on them? Do you sell them? How?

a)I generally prefer to deal directly with people interested in my artworks and soon it will be also a special section on my website where I will put all the artworks I decided to sell.

So, it's easy.. just contact me writing at info@petuliamattioli.com