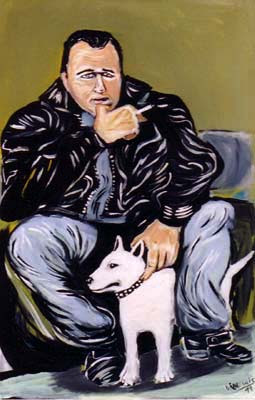 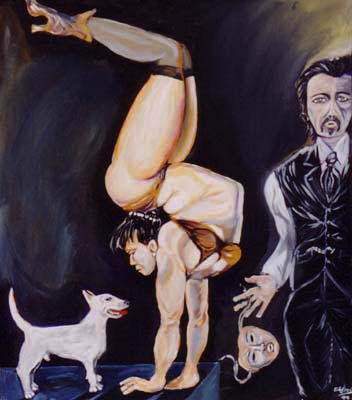 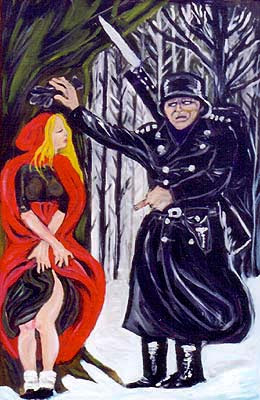 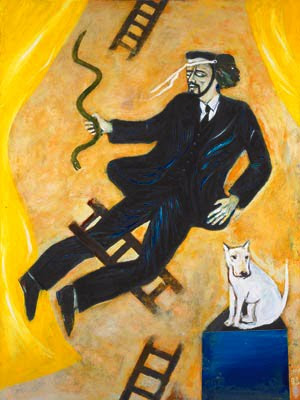 a)My name is Bill Lewis and I live in the Medway Towns in the County of Kent, England but I originally came from a small village called Barming near Maidstone in the same County.

a)I am a poet and author of short stories and a visual artist. I have published 25 books, 15 of them poetry and my work has appeared in anthologies, magazines and journals on both sides of the Atlantic. My poems have been translated in Spanish and some of my stories have been translated in to German. I was one of the 6 original Medway Poets and performed with that group at many venues including the Cambridge International Poetry Festival and on BBC television and Radio. I also performed my poems in Europe, USA and Nicaragua during the Sandinista revolution.

I was the first 'Writer in Residence' at the Brighton Festival.

As a painter I was one of the 13 original Stuckists and with them I have exhibited in London, Liverpool, Paris, Berlin, New Jersey, Los Angeles and many other cities.

I am also a founder member, along Joe Machine, of the Collective Remodernists: A splinter group of the Remodernist Movement.

My photographs were exhibited in the first Exhibition of International Photography in Medway.

a)I think what sets my written work apart is my lack of formal education. I left school at the age of 15 and I am self taught, despite this I would consider myself to be an intellectual and I have no problems about referring to myself in that way. I spent many years in study outside of the educational system. I have studied mythology for 30 years and during my poetry reading tours in the USA I was asked on several occasion, as a guest lecturer at 2 Universities, to give lectures on aspects on mythology and spirituality.

My visual work is, like many people involved with Stuckism and Remodernism is also self-taught so I do not see painting as an exercise in formalism but as an expression of an authentic need to deal with the inner workings of the psyche.

a)I have only shown my work since my involvement with the Stuckist movement which began 10 years ago. With regards to my visual art I suppose the biggest break would be exhibiting at the 'Punk Victorian' exhibition at the Walker Gallery, Liverpool.

As for my written work, there have been several pieces of luck, one of which would be being invited to read at the Cambridge International by the writer Richard Burns.

a)I have made 3 paintings in a planned series called 'The Days of the Week' I have completed Sunday, Friday and Thursday. I am also working on paintings that examine the ambiguity on gender.

With my writing I am working on a biographical book which has the working title 'Prisoner of the Cathode Ray' which is about the effect of television and cinema on my as a child and adolescent and how it lead to me being an artist and writer.

a)Yes, always listen to music when I am painting and sometimes when I am writing. I have an eclectic taste in music. I may listen to a classical piece by one of my favourite composers for instance 'The Concerto de Aranjuez' by Rodrigo or something by Vaughan Williams, or it my might anything from French Chanson to Jewish Klezmer.

a)Quite recently I have been working on a film script connected to a short story of mine that we (with the filmmaker Jonathan Henkel) may turn into a short film,

a)It is always better to start out with a group. Find like minded friends and associates and try to work with them. This will not only help you to afford to put on exhibitions financially but you will also be able to help each other grow as creative people. Always take on board constructive criticism if it comes from sources that you trust.

a)None planned at the moment although there is a possibility of a joint exhibition with the Czech Stuckists to be held in London early in 2011 and possibly one in Athens later next year. There is a possibility that I will exhibit in Australia too, but as I am scared of spiders I may not go !!

a)I have a page on Wikepedia and also there are film clips of me reading some of my new poems on YouTube and later next year there will be some clips, also on YouTube, of interview with me.

Posted by Claudio Parentela at 4:13 PM No comments: 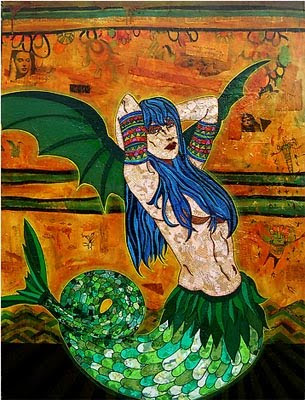 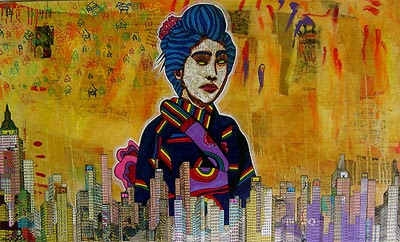 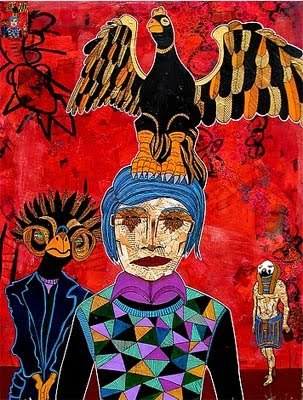 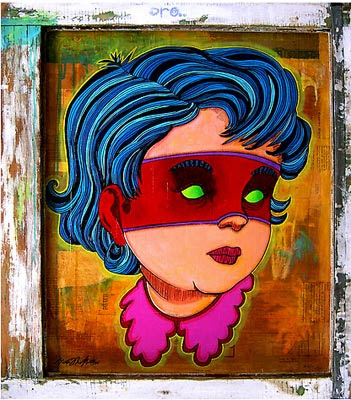 a)Gabriel Shaffer. I was born in Marietta Ohio and raised across the river in Parkersburg West Virginia most of my life. Although i dont believe thats where im from. i dont know where im from, but something tells me, im going back there someday. I now live in the mountains of Asheville,North Carolina.

a)I make art for a living. I mostly work in Collage/Mixed media and illustration, but i have been expanding more and more into sculpture and assemblages.

a)A few things. Probably the way my style straddles the line between modern urban influenced art forms and Outsider/Folk art. I was raised within the genre my entire life, as my mom is a pretty famous Folk/Visionary artist. I had exposure to alot of that type of art growing up, while developing interests in many other movements. There are a few contemporary American self-taught artists currently redefining the genre as Old School Outsider/Folk art dies out. Id like to think i play an important role in that redefinition. Im trying to do my best to create contradictions that work well together. Past and future. Primitive and refined. Childlike and adult. I also think the way i utilize my collage techniques is fairly unique. Even though there are many other artists that work with paper, i think the methods i use to present them is special and shows a respect to their salvaged origins.

a)My first real "show" was in July 2004 at the Broome Street gallery in SOHO, New York City. I was also lucky enough to have a few of my pieces hang in the historic Cedar Tavern at the same time. I guess my "break" started around the end of 2004 when various Outsider/Folk art galleries and dealers started to take an interest in me. I had my premier at the 2005 Outsider Art Fair with the Berenberg gallery. We sold all of my available pieces and i was featured in a full page ad in Raw Vision magazine. That pretty much blew my mind. Ive done over 90 shows and exhibitions since.

a)My family first and foremost. The struggle for us to pull ourselves out of poverty and create a better life for ourselves, is a naive dream i still believe in. My wife, my mother and my sisters are my biggest sources of inspiration. Next to that my animals and then my few close friends. The various invisible friends, ghosts and demons that wander in and throughout my studio as im working are pretty motivating. I also like to entertain the notion that i can travel between worlds in my mind, so thats pretty engaging. Caffeine is my savior.

a)Constantly yes. It changes over time with stages of my work.One band that has been a heavy inspiration in my work for the past year is Electric Owls and their super talented frontman Andy Herod, a close friend. Ive been listening to alot of Caribou, Isis, Jonsi, The Knife, Meschiya and the Little Big Horns, Neurosis, Charlie Parker, Mastodon,El-P, Grizzly Bear, 2PAC, Bon Iver, Lungfish, Eminem and Tyler Ramsey, but not necessarily in that order. Id also say i wouldnt be where i am today if it hadnt been for the band Tool. Not just artistically, but personally as well. Danny Carey has played a really big role in my life.

a)I spent most of my life writing poetry, short stories and screenplays. Once i got caught up in visual art as a full time thing, in 2002 or 2003, i decided to take a hiatus from writing to consolidate focus and energy. Ive only written a couple of little things since. But, ive been developing a new project for the last 6-8 months. Im taking my time with it, but i can say its pretty inevitable that i will be writing again sometime in the near future and possibly teaming it up with my illustration work.

a)Learn how to use the internet, learn how to talk about your work and never stop pushing forward.

a)I am currently a part of the NCNC exhibition at SECCA in Winston-Salem, North Carolina, which is once of my biggest exhibitions to date, that show will run into the early spring 2011. I will be a featured artist with the Outsider Folk Art Gallery at the Outsider Art Fair in NYC, FEB 2011. Im excited about a few shows next year. Ill be in a really kick ass works on paper show with Blue Spiral 1, here in Asheville, Summer 2011. Also a sick Denver group show being curated by Thinkmule. Im presently organizing the early phases for a conceptual group show ill be curating with the Satellite Gallery, In Asheville, Aug 2011, thats going to probably be the wildest project of the year. Theres a number of gigs happening in 2011, the best way to keep up is through my website, Facebook or Twitter feed.

Posted by Claudio Parentela at 8:14 AM No comments: